The origins of the monk seal genus known as Monachus go back 15 million years. Evolution has all but left them alone. Biologists believe the way they look today is the way they looked millions of years ago.

Monk seals are the oldest of all living pinnipeds — a family of fin-footed mammals that includes seals, walruses, and sea lions. There are three known species of monk seals – Hawaiian (Monachus schauinslandi), Caribbean (Monachus tropicalis), and Mediterranean (Monachus monachus).

Adult seals measure about seven feet long and weigh between 400 and 600 pounds. A thick layer of blubber insulates them from the cold, gives them buoyancy, and serves as an energy reserve. Generally, they forage at night and sleep the day away on sandy beaches. (VIDEO: Watch Hawaiian monk seals in captivity)

According to scientific consensus, monk seals originated in the North Atlantic and migrated into the Caribbean, Mediterranean and Pacific when a natural ocean passage existed between North and South America in what is now the country of Panama. When Panama’s narrow waterway closed 3.5 million years ago, the monk seals became permanently cut off from each other.

It isn’t clear how far and wide the Hawaiian monk seal spread through the Pacific, but scientists agree they likely inhabited all the Hawaiian archipelago, which is made up of the main Hawaiian Islands (Oahu, Maui, Kauai, Niihau, Lanai, Kahoolawe, Molokai and Hawaii, often called “The Big Island”), and the Northwest Hawaiian Islands or Leeward Islands (small coral islands and atolls including Midway and Laysan and French Frigate Shoals). The island chain stretches 1,500 miles from The Big Island to Kure Atoll.

In a non-descript modern high-rise in downtown Honolulu, scientists and officials working for the National Oceanographic and Atmospheric Administration (NOAA) are leading the federal effort to recover the species.

Since the species was listed on the Endangered Species Act in 1976, the federal agency has conducted research on monk seal foraging and breeding patterns, set aside critical habitat in the Northwest Hawaiian Islands for the seals, and nursed and released underweight yearlings, all in effort to get the population growing. It hasn’t helped. In fact, the population has gone down.

“They have been declining at a rate of 4.5 percent a year. And that hasn’t changed since I started working here seven years ago,” says Charles Littnan, foraging ecologist with NOAA’s Hawaiian monk seal research program.

The 2009 breeding season in the Northwest Hawaiian Islands produced the fewest pups in 10 years. Biologists counted 119 pups. The total population is estimated to be 1,100. To put that in perspective, the population a mere decade ago was estimated to be anywhere from 1500 to 1700. Littnan predicts their numbers will dip below 1,000 in the next three to four years. The Hawaiian monk seal population is crashing.

What’s causing the die-off? Scientists don’t know for sure, but it’s likely a combination of factors – shark predation, malnourishment from a lack of fish, and entanglement in marine debris – junk, plastic, old fishing nets, simply tossed into the water and left to float around.

For every species listed as endangered, conservation officials must submit to the government a comprehensive report that shows what should be done to recover populations, including how much it will cost. As defined in The Recovery Plan for The Hawaiian Monk Seal (last updated in 2007), “recovery” would mean a population of 2900 or more seals throughout the Hawaiian Island chain. That’s more than double the current population — a population that is dropping. And how much will it all cost? A staggering $378,425,000. Until 2008, NOAA’s annual Hawaiian monk seal budget was around $2.2 million; in 2009, it increased to $5.7 million.

While the die-off in the Northwest Hawaiian Islands is a major focus of their work, Littnan and NOAA staff now have a new and equally complex problem to deal with – a growing population of monk seals in the main Hawaiian Islands. A problem? Isn’t that what they want, to grow the population? Yes, of course, says Littnan, but the seals’ presence on public beaches and in waters frequented by fishermen has placed them in direct contact with humans unaccustomed to having them around.

“Generation after generation of people grew up here and never had seen a monk seal,” Littnan explains. The first sightings came in the late 1960s, 70s and 80s. Residents might see one or two a year if they were lucky. It’s only been in the last 10 years that the monk seals have really come on strong.

When it comes to being “cute,” Hawaiian monk seals have that going for them. The seals have large eyes, prominent snouts with long whiskers, and a streamlined body. They are born jet-black and as they get older their coats turn silvery-gray and can appear brown or greenish from algae.

A cute wild animal threatened with extinction. “You think it would be a slam-dunk in terms of getting people behind it,” says Littnan.

But the reality is, it’s a tough sell. (Read Chapter 3) 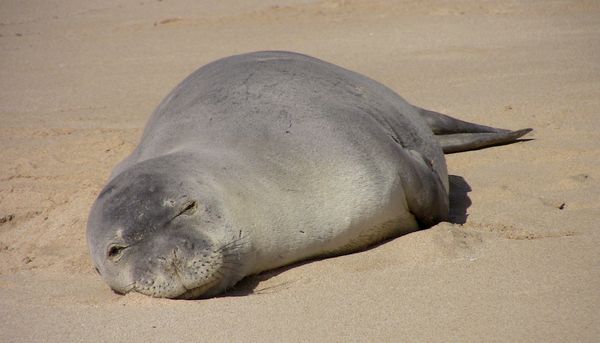 Can Hawaiians and monk seals learn to coexist or will humanity’s need for resources lead to the animal’s demise? 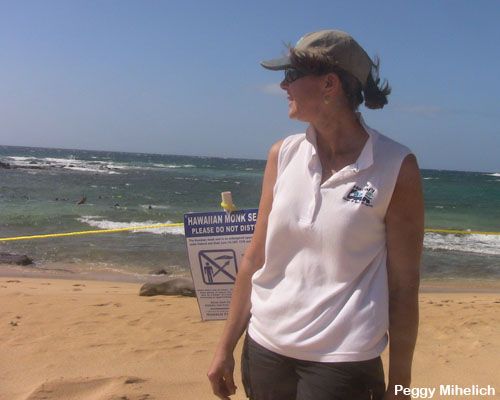 Intentional killings represent the most hostile reaction to increasing seal populations in the main Hawaiian Islands.